Netball is physically demanding – its rules and court surface have evolved a game that requires explosive bursts of speed, sudden changes in direction or braking and the ability to jump.  Footwork rules mean that frequent and explosive bursts of acceleration to receive a pass are usually followed by rapid deceleration.

Biomechanical studies have indicated the abrupt deceleration characteristic of netball landings after catching a ball result in excessively high ground reaction forces when a player’s foot contacts the ground.  Excessive and repeated ground reaction forces can increase risk of lower limb ligament damage and chronic musculoskeletal disorders.  Although players may be able to withstand high ground reaction forces if their musculoskeletal system is properly aligned, players with a skeletal malalignment, unusual footfall pattern or who land incorrectly risk potential injury.  As such, netball has attracted a reputation as a game with a high potential for injury particularly to the lower limbs.

The most frequent netball injury occurs to the ankle, particularly sprains of the lateral ankle ligaments.  That is, a player lands on the outer border of the foot, causing the ankle to “roll” in under the leg and stretching or tearing the lateral ligaments of the joint.  Ankle injuries account for approximately 60% of total netball injuries requiring treatment.

A tip for lower leg rehabilitation is to use Vibram FiveFinger as your footware. As well as the sport applications the Vibram FiveFingers are being used by chiros, physios, and podiatrists to increase foot strength improve mobility and strengthen neural pathways.

The near perfect proprioception together with the grip of the TC1 sole allows patients recovering from accidents caused nerve trauma to become mobile (and thereby recovering) faster.

‘For many years I have been telling my patients that we are hunters and gatherers. We should be walking across rocky outcrops on undulating surfaces in barefoot – or with a piece of leather strapped to our sole. Now, Vibram have made the perfect shoe. Fivefingers. Well Done. (Brent Gordon – Chiropractor/Osteopath) 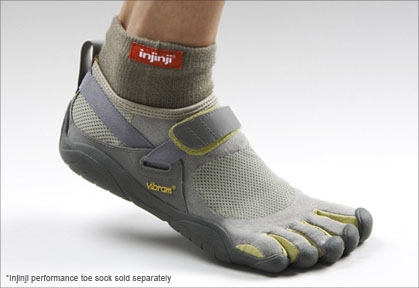 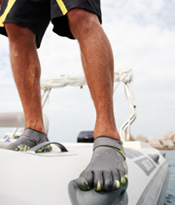