Indian clubs or Club Bells belong to a category of exercise (and juggling) equipment that was popular in the late 19th century and early 20th century in Europe, the British Commonwealth and the United States. They comprise bowling-pin shaped wooden “clubs” of varying sizes and weights, which are swung in certain patterns as part of an exercise program. They can range from a few pounds each, up to special clubs that can weigh as much as 50 pounds. They were used in carefully choreographed routines where the clubs were swung in unison by a group of exercisers, led by an instructor in the front, similar to modern aerobics classes. The routines varied according to the group’s ability and the weight of the clubs used.

and pehlwani wrestlers in India to train for strength. The practice of swinging such clubs to develop physical fitness was first recorded in ancient Egypt and the Middle East. It was introduced to England by British soldiers who were stationed in India during the 19th century.

Here is a link to the training manual of Sim D. Kehoe, published in 1866, who brought Indian clubs to the United States from England. They were exceptionally popular during the health craze of the late Victorian era, used by military cadets and well-heeled ladies alike, and even appeared as a gymnastic event in the 1904 and 1932 Olympics. Gymnasiums were built just to cater to club exercise groups. The popularity of the Indian Club waned in the 1920s and 1930s as organized sports became more popular. Regimented exercise routines, like those requiring Indian clubs, were relegated to professional athletes and the military, who had access to more effective and modern strength training equipment.

While torches and other sticklike objects have been used in juggling for centuries, the modern juggling club was inspired by the Indian club, which was first repurposed for juggling by DeWitt Cook in the 1800s.

There are current physical fitness enthusiasts who have revived the popularity of Indian clubs in the modern day, citing the aerobic exercise and safety advantages over traditional free weight regimens. Scott Sonnon,

an American martial artist and fitness educator has developed a great DVD on Circular Strength Training with Clubbells. 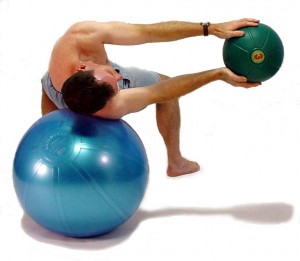 Cyclone Ball gives you an ab workout with a twist